South Australia (abbreviated as SA) is a state in the southern central part of Australia. It covers some of the most arid parts of the continent. With a total land area of 983,482 square kilometres (379,725 sq mi), it is the fourth-largest of Australia's states and territories. It has a total of 1.7 million people, and its population is the most highly centralised of any state in Australia, with more than 75 percent of South Australians living in the capital, Adelaide, or its environs. Other population centres in the state are relatively small.

South Australia shares borders with all of the other mainland states, and with the Northern Territory; it is bordered to the west by Western Australia, to the north by the Northern Territory, to the north-east by Queensland, to the east by New South Wales, to the south-east by Victoria, and to the south by the Great Australian Bight and the Indian Ocean. The state comprises less than 8 percent of the Australian population and ranks fifth in population among the six states and two territories. The majority of its people reside in Adelaide. Most of the remainder are settled in fertile areas along the south-eastern coast and River Murray. 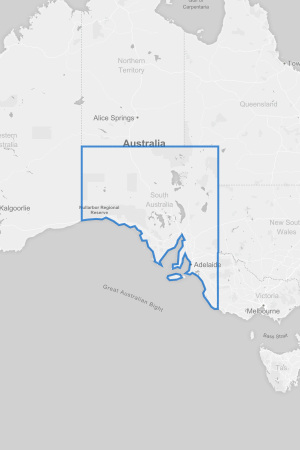