The Northern Territory (abbreviated as NT) is a federal Australian territory in the centre and central northern regions. It shares borders with Western Australia to the west (129th meridian east), South Australia to the south (26th parallel south), and Queensland to the east (138th meridian east). To the north, the territory is bordered by the Timor Sea, the Arafura Sea and the Gulf of Carpentaria. Despite its large area—over 1,349,129 square kilometres (520,902 sq mi), making it the third largest Australian federal division—it is sparsely populated. The Northern Territory's population of 243,700 (2014) makes it the least populous of Australia's eight major states and territories, having fewer than half as many people as Tasmania. The Northern Territory's capital city is Darwin. 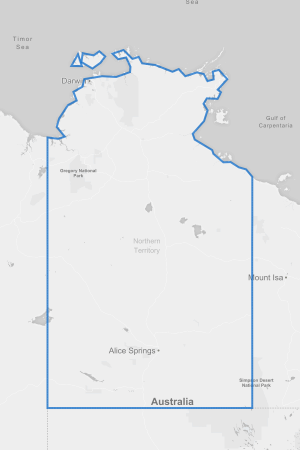