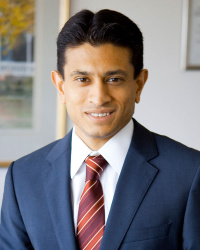 Raj graduated from Sydney University in 1999. After his internship at Westmead Hospital, he spent two years working in general and subspecialty surgical terms, followed by three years of general surgery and neurosurgery registrar positions.

He commenced neurosurgery training in 2005 and completed this in 2009, becoming a Fellow of the Royal Australian College of Surgeons. During the course of his neurosurgical training, he also participated in research of radiosurgical treatment of cerebral arteriovenous malformations with Prof Marcus Stoodley, and attained a Master of Surgery from the University of New South Wales.

Following a locum neurosurgery appointment at Prince of Wales Hospital, Raj undertook further specialist training via a fellowship in complex spine surgery at the Toronto Western Hospital, affiliated with the University of Toronto, from 2010-2011. During this period, he combined working as clinical fellow with teaching responsibilities and clinical research. He also undertook a fellowship in paediatric neurosurgery at one of the leading paediatric centres in the world, The Hospital for Sick Children in Toronto.

Raj returned to Sydney to commence practice as a consultant neurosurgeon. He operates at the Prince of Wales Public and Private Hospitals, and Sydney Children’s Hospital. His primary rooms are at the Prince of Wales Private Hospital; but he also consults and services regional centres. He is a professional member of many of the specialities associations (including the Australian Medical Association, Neurosurgical Society of Australasia, Spine Society of Australasia, American Association of Neurological Surgeons, North American Spine Society, and International Society of Paediatric Neurosurgeons).

Raj manages all neurosurgical conditions, both cranial and spinal. He has a special interest in spine surgery, with foci on minimally invasive techniques as well as complex reconstructive surgery. The focus of his cranial surgery is in the management of intracranial tumours, trauma, and craniofacial operations; in both adults and paediatric patients.

Through his appointment at Prince of Wales Public Hospital and affiliation with the University of New South Wales, he is actively involved in the under-graduate teaching of medical students and the post-graduate training of neurosurgical residents and registrars.