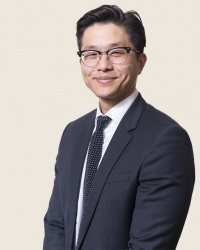 John Ding is a Melbourne based gastroenterologist. Having completed his post-graduate research at one of the world’s leading centres in IBD care, St Mark’s Hospital, London, he now divides his time between private practice and a senior medical specialist appointment at St Vincent’s Hospital where he is a part of the gastroenterology and inflammatory bowel disease units.

Currently the holder of a prestigious international grant awarded by the European Crohn’s and Colitis Organisation (ECCO), John’s extensive work in the field of Inflammatory Bowel Disease (IBD) has led to his appointment onto the ECCO committee as the first non-European member, and is regularly invited to speak at international and national conferences. He is also the founding member of the Young Australian Crohn’s and Colitis Network. His PhD research investigating the personalization of medical therapy for patients with IBD using microbiome and metabolic profiling has led to numerous publications and been cited internationally.

John has an interest in luminal gastroenterology (IBD and irritable bowel syndrome) and engages and leads on research projects in these areas through International consortium (GETAID), St Vincent’s Hospital and the University of Melbourne. He additionally holds the position of head of the IBD Clinical trials Unit at St Vincent’s Hospital and lead for the National Bowel Cancer Program. His other interests include bowel cancer screening, coeliac disease, irritable bowel syndrome and gastro-oesophageal reflux disease among others.

John offers endoscopy services at St Vincent’s Private Hospital and Jolimont Endoscopy, where open access endoscopy is also available as well as weekly endoscopy lists at St Vincent’s Public Hospital and Werribee Mercy Hospital. John works from a patient-centered approach and enjoys working collaboratively with GPs and other health professionals to ensure cohesive treatment. He can also converse in Mandarin.