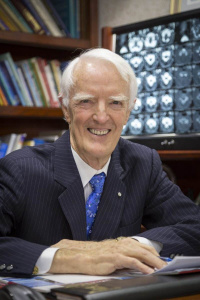 Founder of Corbett Neurophysiology Services (CNS) After graduating as Dux of his primary and secondary schools, John qualified in Medicine at the University of Queensland with the leading academic honours for his course. He became the Queensland Rhodes Scholar in 1965 and after achieving an Oxford MA and a Doctorate of Philosophy in neurophysiology, he became the inaugural BMA Research Fellow and an Oxford Don. During this 9-year period, he published 56 articles in learned academic journals, before accepting a senior neurophysiology appointment at Harvard University and Massachusetts General Hospital. After this, he returned to Australia, where he worked at various universities and public hospitals, and later in private medical practice. He has been closely involved in neurophysiology throughout his career, and had a central role in helping to establish one of the largest sleep-medicine groups in the world, comprising 30 sleep centres. For about the last 10 years he has limited his practice to neurophysiology (NCS, EMG and EEG) and in 2003, was one of the few medical practitioners in Australia who was awarded a Centenary Medal for “Distinguished Service in the Field of Medicine”. In order to enable CNS to cope with an exceptionally long wait-list for new appointments, John has now gathered together a team of like-minded neurologists who share his passion for neurophysiology. The CNS vision is to provide patients and referrers with high-quality, largely bulk-billed neurophysiology, as a gesture to help patients cope financially in a world of ever-rising medical costs.