Queensland (abbreviated as Qld) is the second-largest and third-most-populous state in Australia. Situated in the north-east of the country, it is bordered by the Northern Territory, South Australia and New South Wales to the west, south-west and south respectively. To the east, Queensland is bordered by the Coral Sea and Pacific Ocean. Queensland has a population of 4,750,500, concentrated along the coast and particularly in the state's South East. The state is the world's sixth largest sub-national entity, with an area of 1,852,642 km2. The capital and largest city in the state is Brisbane , Australia's third largest city. Often referred to as the "Sunshine State", Queensland is home to 10 of Australia's 30 largest cities and is the nation's third largest economy. 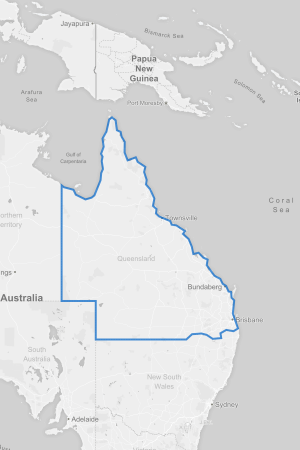