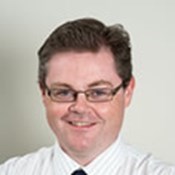 Dr Adams attained his medical degree (MBChB) at the University of Edinburgh, United Kingdom in 1998. Dr Adams had also completed a Bachelor of Science (BSc) majoring in pharmacology prior to this. Dr Adams undertook his medical training in the United Kingdom at Western General Hospital, Stobhill Hospital, Aberdeen Royal Infirmary, Royal Marsden Hospital and Clatterbridge Centre for Oncology. During his training, Dr Adams spent a few years as a principle house officer at Fraser Coast Health Services and Nambour Hospital. IN 2009 Dr Adams become a fellow of the Royal College of Radiologists (FRCR) in the United Kingdom.

In 2010 Dr Adams became a radiation oncology Fellow at the Royal Adelaide Hospital, and successfully became a fellow of the Royal Australian and New Zealand College of Radiologists (FRANZCR) in 2011. Dr Adams also undertook a Fellowship in head and neck cancer, melanoma and neuro-oncology at Princess Alexandra Hospital in Brisbane before taking up a consultant position at the Alan Walker Cancer Centre in Darwin. He has been a radiation oncologist in Bundaberg since the opening of the centre in October 2013.