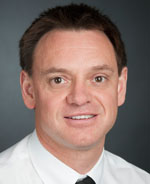 Dr Singleton graduated with MBBS from the University of Adelaide in 1991. He did his training at the Royal Adelaide Hospital and St Vincent‟s Hospital, Sydney. Dr Singleton obtained Doctor of Medicine at the University of New South Wales studying cardiac ion channels which are fundamental to all cardiac arrhythmias, but of particular relevance to genetic abnormalities which predispose to cardiac arrhythmias such as the Brugada syndrome and the Long QT syndromes. Dr Singleton was a fellow in Cardiac Electrophysiology at the Royal Prince Alfred Hospital, Sydney, before returning to Adelaide in 2000 to take up the position of Staff Specialist in Cardiology (Electrophysiology) at Flinders Medical Centre, SA.

Dr Singleton is 0.6 FTE staff specialist at Flinders Medical Centre, and conducts private practice on the Flinders Campus, at the Ashford Cardiac Clinic and Ashford Hospital and Stirling District Hospital.

Dr Singleton is a member of the Board of the Cardiac Society of Australia and New Zealand (CSANZ) and is currently Chairman of CSANZ Electrophysiology and Pacing Council.