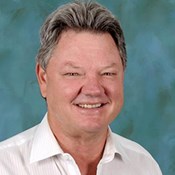 Professor Burmeister completed his undergraduate training (MB ChB) and specialisation in radiation oncology at Groote Schuur Hospital with the University of Cape Town. Following a 3 year fellowship in Auckland he moved to Royal Brisbane and Women’s Hospital in 1989 where he commenced as a consultant. In 1997 Professor Burmeister joined the Faculty of Health Sciences, University of Queensland and has continued to be involved in teaching medical students. In 2003, Professor Burmeister took the position of Director of Radiation Oncology at Princess Alexandra Hospital which he held until 2014. Professor Burmeister is a fellow of the Faculty of Radiology, Therapeutic in South Africa (FF Rad (T) (SA)) and a fellow of the Royal Australian and New Zealand College of Radiologists (FRANZCR).

Professor Burmeister has recently completed his degree of Doctor of Medicine at the University of Queensland and was the President of the Trans-Tasman Radiation Oncology Group from 2007 until 2013. He was deputy chair of the Medical and Scientific Advisory Committee of Queensland Cancer Council from 2008 until 2015. He currently serves on the Board of the Wide Bay Hospital and Health Service.

He is frequently invited to speak at both national and international meetings and has a major interest in clinical trials involving melanoma and oesophageal cancer. His research achievements in the last six years include being a principal or co-investigator on over 20 clinical trials and projects, a number of which have been awarded funding by the Australian National Health and Medical Research Council. Professor Burmeister is also on the Editorial Review Board of several journals including Lancet Oncology, Journal of Thoracic Oncology, International Journal of Radiation Oncology Biology Physics, JAMA Oncology, Journal of Medical Imaging and Radiation Oncology, Medical Journal of Australia. He is also co-author of the chapter on melanoma in the well-known textbook ‘Clinical Radiation Oncology, 4th Edition’.