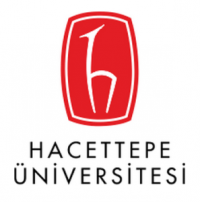 Hacettepe University is a major state university in Ankara, Turkey. Based on academic performance, it ranks 1st among Turkish universities with medical schools.[1]

The University has two main campuses. The first campus is located in the old town of Ankara and hosts the Medical Centre, and the second one, Beytepe Campus is 13 km (8 mi) from the city centre. The Beytepe Campus covers 6,000,000 m2 (600 ha; 1,483 acres) of green land and woodland, and hosts the faculties of Economic and Administrative Sciences, Law, Education, Engineering, Fine Arts, Letters, and Science. In addition to these two main campuses, the School of Social Work is located at Keçiören, and the Turkish State Conservatory in Ankara, affiliated with the University as of 1982, is located at the Beşevler Campus.[2]

The Hittite stag, which served as the inspiration for the Hacettepe University emblem The history of Hacettepe University can be traced back to the establishment of the Institute of Child Health on July 8, 1958, and the inauguration of the Hacettepe Children's Hospital founded by Prof. Dr. İhsan Doğramacı. In 1961 the School of Health Sciences and its divisions of Nursing, Medical Technology, Physical Therapy and Rehabilitation and Nutrition were opened, all centered on the Institute of Child Health.

In the summer of 1964, a School of Basic Sciences was opened, offering courses in the natural sciences, social sciences and the humanities. At the time, all Hacettepe teaching institutions were affiliated to Ankara University and grouped under the title "Hacettepe Science Center".

Hacettepe University was chartered through Act No. 892 of the Turkish Parliament on July 8, 1967. Hacettepe Institutes of Higher Education formed the core of Hacettepe University, and the Faculties of Medicine, Science and Engineering, and Social and Administrative sciences were established.

Official Seal[edit] The emblem of the University was designed in 1967 by Dr. Yücel Tanyeri, then a second year medical student, in the likeness of a stag – the symbol of a Hittite deity discovered at the royal tombs in Alacahöyük. Inspired by this archeological symbol common to the region, the Stag was chosen as the symbol of the University, and was abstracted to represent a lowercase "h" – the first letter of the university's name.[1]