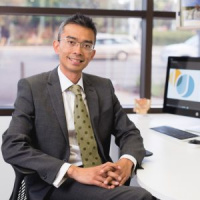 Akhlil Hamid ( Ak as he prefers to be called) is originally from Malaysia. He went to boarding school in the UK at Radley College and gained a Medical degree from Nottingham University in 1995. He gained a post graduate doctorate (MD) in prostatic disease and bladder dysfunction (2003) after which he completed his specialist urology training in the UK (2006). He came to Perth in 2006 for a year long Fellowship at Royal Perth Hospital and returned to the UK to work as a Consultant in Nottingham University Hospital (2007-2011) where he was Clinical lead in Uro-oncology. He and his family were lured back to the WA lifestyle in 2011 and he now makes Perth his home. Ak spent the past 4 years at Royal Perth Hospital and was Head of Department at RPH for the last 2 years. He has an interest in laparoscopy, uro-oncology, urodynamics and spinal urology and is presently a Consultant at Fiona Stanley Hospital, works at SJOG Wexford centre, Murdoch and visits Geraldton.