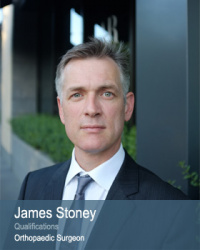 Mr. James Stoney is a consultant orthopaedic surgeon specialising in surgery of the hip and knee.

Born and educated in Melbourne, Mr. Stoney attained his medical degree at the University of Melbourne in 1992.

He completed his Orthopaedic surgery specialty training in 2001 becoming a Fellow of the Royal Australasian College of Surgeons.

He pursued his interests in hip and knee surgery in 2002 and 2003 with Fellowship positions in Hip and Knee surgery at Southmead Hospital in Bristol, UK. He then spent 6 months as a Consultant Orthopaedic Surgeon at the Bristol Royal Infirmary.

Mr. Stoney is currently the Clinical Director of Musculoskeletal services and the Deputy Director of Orthopaedics at St Vincent’s Hospital, Melbourne (public).

He maintains a keen interest in Orthopaedic clinical research and is the author or co-author of 23 publications in national and international peer reviewed journals.

He is the Assistant Deputy Director of the Australian Orthopaedic Association National Joint Replacement Register.

He enjoys teaching orthopaedic surgical trainees and holds a position as an Honorary Lecturer in Orthopaedics for the University of Melbourne.

He is a Fellow of the Australian Orthopaedic Association (FAOrthA) and the Royal Australian and New Zealand College of Surgeons (FRANZCS). He is a member of the International Society for Hip Arthoscopy (ISHA) and the Arthoplasty Society of Australia (ASA).

Mr. Stoney is married with three children. He plays golf when he can and is a keen Hawthorn supporter.