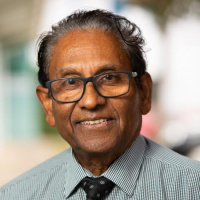 Dhan Padayachee qualified from the Royal College of Surgeons, Dublin, Ireland in 1961. On returning to his birthplace of Durban South Africa, he worked at the King Edward VIII Hosptial – Dept of Obstetrics & Gynaecology and obtained a Diploma in O & G.

He and his wife ran a General Family Practice first in South Africa, then on migrating in 1978 to Australia, in a suburban area of Melton.

From doing Obstetrics he has branched into care for the elderly in 3 nursing homes.

Special interests include Sports Medicine, Obstetrics & Gynaecology and Care for the Elderly

He would like to be reminded not to count the years, but to make the years count.