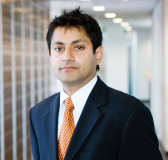 Dr Ashish Misra commenced undergraduate training at The University of New South Wales in 1986 and graduated in 1991. He commenced postgraduate training at Royal Prince Alfred Hospital in 1992 and after successfully completing the Royal Australasian College of Physicians examination continued on to specialist training in clinical haematology/oncology at the Royal Prince Alfred Hospital, a centre recognised by the World Federation of Haemophilia for training.Dr Misra’s specialist training included all aspects of benign and malignant disease and the diagnosis and management of inheritable coagulation disorders such as haemophilia. In addition he expanded his expertise to include all aspects of autologous and allogeneic bone marrow/stem cell transplantation including umbilical cord blood transplantation.Dr Misra also undertook specialist training in haematopathology including all aspects of the investigation, diagnosis and management of blood disorders such as haemostasis/thrombosis, cytogenetics, molecular genetics and blood banking. He also expanded his expertise to include paediatric haematology (including haematopathology) and oncology with a further two years of training at The Childrens’ Hospital at Westmead in Sydney. During this period he was also a clinical academic with the University of Sydney. After successfully completing training and an investiture of The Fellowship of the Royal Australasian College of Physicians and The Fellowship of The Royal College of Pathologists of Australasia, Dr Misra was recruited to the Mater Misericordiae Hospitals in Brisbane, Australia in 2005. Dr Misra’s work at the Mater campus included the management of antenatal foetal problems as well as high risk pregnancies and deliveries, Medical Director of The Queensland Cord Blood Bank, and the haematologist in charge for the haematology laboratory at Mater Pathology including the general haematology, haemostasis, cytogenetics and molecular laboratory.

In 2008 he accepted the position of staff specialist at The Royal Brisbane and Womens’ Hospital in haematology and bone marrow transplantation where he currently works. In addition Dr Misra provides clinical haematology services to Redcliffe Hospital.