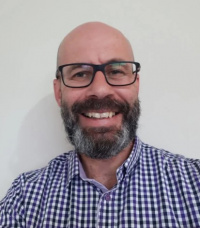 John Tonietto graduated with a double degree from the Faculty of Biomedical and Health Sciences at RMIT University in 1997 and has since undertaken further studies in rehabilitation and education.

He worked in a variety of clinical settings in Melbourne and country Victoria before becoming a practitioner at Police Road. He has been the owner/operator of the clinic since 2005. John likes a more thorough approach when doing treatment. His treatments usually entail a combination of deep tissue therapy, joint mobilisation and manipulation and exercise therapy. It’s what works well on his back so it makes sense that he practices in this way. He is also qualified in the technique of Dry Needling. He is a 20-year member of Chiropractic Australia.

John is a keen runner, though with three children he doesn’t get to run as much as he’d like. He’s knees and hips are happy about that.